Some years ago I for a while experienced a lovely recurring dream. It is night time, somewhere on the rural edge of a sleeping suburb. I stand on my deck and look out across sloping lawns towards other houses tucked in for the night. A midsummer night scented with life. The moon is full, and casts not the cold whiteness that frightens in scary stories, but an almost golden light, palpable and soothing. It is warm, but not hot.  Against the background of crickets an occasional night bird.

Slowly, calmly, as it seems to be no surprise to me, I start to rise, higher and higher so that first I see my house, and its neighbors nestled among the darker forms of trees in summer leaf. The sleeping town a pool of light, other settlements glowing warm in all directions, knit together by empty roads, the sleeping homes and towns secure in a restful darkness. All around the loom of distant wooded hills..

I am filled with a calm, wordless joy at the fullness of life.

The genesis of this vision most likely was a night flight from Portland to SFO that followed 101 south, the small islands of light of places like Willits and Cloverdale forming an archipelagic string of light parallel to the blackness of the Coast Range. Now, I’ve found a way to experience this as a waking dream.

American to DFW is the earliest flight out of Fort Wayne. I took it first when later trips were full now I always take it on my way back to the West Coast, The airport is empty; too early even to get a coffee, but this means a quick pass through security where the TSA folks must be morning people who have asked for this shift because they are friendly, welcoming and solicitous of passengers who may be sleepwalking.  Customers for these early morning regionals are generally a cheerful lot, not the grumpy sleep deprived that one would expect. Getting such an early start on the day feels like an accomplishment, so pre dawn fliers, if not exactly smug, seem pleased with themselves.

This morning there is a bit of a hitch: It is announced that the toilet is out of service, and that anyone who can’t hold it until DFW should consider another flight. The flight attendant, a tall young Asian woman, named, Asia,-yup -that’s right -reiterates the announcement as we strap in, and just as we take off the pilot says if any body really really has to go, we’ll land some where. He seems pretty cheerful,and I suspect the folks up front have been enjoying a little early morning bathroom humor

First the grid lines of semi urbanized Fort Wayne, then across Indiana and Illinois the chess boards of county roads dotted with farm towns, a major highway cutting across the symmetry here and there, and a faint tinge of dawn on the eastern horizon. Missouris, the lights and towns, some only hamlets sheltering in a fold of hills, are scattered, the more poignant for shining alone.

And in the cabin, a little bit of excellent customer service. Asia announces that drinks and snacks will be free for the first service , so I have some trail mix and a Bloody Marry. First a toast with the Cabo bound couple across the aisle, then sip and sip again, as the dawn line reddens. Nose against the port, transfixed, so that Asia has to nudge me a couple of times to get my attention before she drops more Smirnoff and trail mix.

“I thought it was only the first round?”

“This is still the first round”

There are times when you should drink in the morning, and this is one.

This morning I don’t want to argue about population displacement, genocide, railroad robber barons manifest destiny, or any of the disputatious the history that spread this country from one sea to another, The human landscape we have together created is lovely beyond telling and shines out into the night. In the blackness it is easier to see what binds us. The road the ties not only of commerce, but of communities that labor together so that night will not prevail.

Trying to see, no, breathe all this in, I think of Thomas Wolfe, who felt at at times an ecstasy over the richness of the land and its people, and in great torrents of words and sentences tumbling towards the revelation that he never quite could quite reach, made his point all the same.

What Wolfe couldn’t have imagined was that this mysticism of the ordinary would one day be open to all, He traveled by train, and saw the lighted Pullmans rushing through the darkness asthe province of an elect.

To anyone outside, a speeding train is a thunderbolt of driving rods, a hot hiss of steam, a blurred flash of coaches, a wall of movement and of noise, a shriek, a wail, and then just emptiness and absence, with a feeling of “There goes everybody!” without knowing who anybody is. And all of a sudden the watcher feels the vastness and loneliness of America, and the nothingness of all those little lives hurled past upon the immensity of the continent. But if one is inside the train, everything is different. The train itself is a miracle of man’s handiwork, and everything about it is eloquent of human purpose and direction…One’s own sense of manhood and of mastery is heightened by being on a train.

Now, despite bag charges, fuel surcharges and ridiculous prices for prepackaged food and drink, the sleepers in the towns below can and do ride above just as easily as I am now. With this different and expanded view, I’m sure Wolfe would see union, not separation.

And while the .sleeping car porters are long gone, we have Asia this morning.

Racing the ribbon of dawn. The stars and the waxing moon are still there, but day is asserting itself. The engine pitch changes and the the plains and rolling hills of Texas are below. In one glance the balance between night and day has shifted. Roads converge and in the distance the glassy towers of a great city reflect the first rays of the sun.

Lower and developments with Tudor mansions nestle in copses of oak, and closer in more modest tracts where swimming pools seem the norm. A few thousand feet above the homes of many thousands of strangers, one feels strangely intimate with these people, the evidence of whose lives fills the view.

The the last few seconds of descent, the final moments of the omniscience of the air traveler. 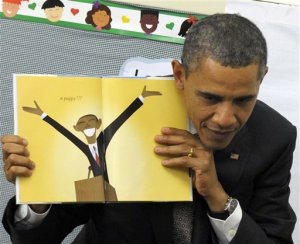 AP pic(Photographer not named) in the Ft. Worth Star-Telegram centers on the President.

This kind of thing works in North Korea, but I’m not expecting the Obama adulation picture books to be followed up by a mass distribution of Obama badges

Well, at least He doesn’t need a teleprompter for this one,

One can only imagine the uproar had President Bush stopped by a classroom to read from a book about – himself.

“But , nyah, nyah there aren’t any picture books( Well, here’s one.  It has words, too) about President Bush coz he’s not cool and he’s a Republican, and Republicans are mean and mean people suck, and mean people hate kids, but children are the future.

It’s interesting to note that the images in the Fort Worth Star Telegram and the Dallas morning Post focus tightly on the president, but does not show his audience. 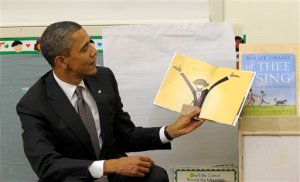 This one from AP photographer Susan Rush in the Dallas Morning News also shows the President's book "Of Thee I Sing."

The President was reading from “Bo, America’s Commander In Leash,”  the first family’s Portuguese water dog.  So where’s the pooch?  In two out of three pics, we just get the CINC thrice.  It’s not about the children. 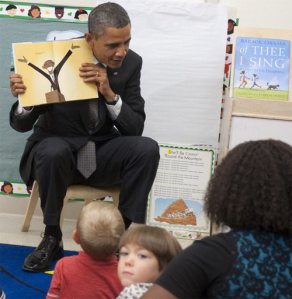 And then there’s this one featured on weasel zippers( decidedly not friendly to the Preisdent) showing a larger scene, in which we also see both Obama books, but what I really like here is the bored little girl looking back at the camera.

Hey kid, school really sucks.  Yup, just another old guy telling you what to think,  You can look forward to as much as another twenty years of this.

And when you do get out finally, you may not know much more than when you started:

In another education related development, schools are pleading to be left off from the test goals set in “No child Left Behind.”

“Duncan has warned that 82 percent of U.S. schools could be labeled failures next year if No Child Left Behind is not changed. Education experts have questioned that estimate, but state officials report a growing number of schools facing sanctions under the law.”

School sucks, and American schools really suck.  In terms of global performance, it may not be “no child left behind,” other than the the kids of Beltway types( and Presidents) going to private schools, as well as many of the teachers’ kids in schools systems like Chicago.  And I’m nor really sure about them.

No, it’s not about the children.  It never is.

Stuff I write About