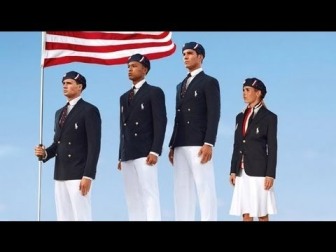 (Pace Prince, and his hit, “Raspberry Beret.” In 2012, no one is partying like it’s 1999, and many count themselves lucky to be working part time at the five and dime and shopping at second hand stores.)

The Ralph Lauren designed uniforms, which include white, rather than raspberry berets, to be worn by the U.S, Olympians have brought on quite a fuss, as patriots of all stripes complain that they were made in China, and look too French.  Or too gay.

Greg Gutfeld of “The Five” on Fox said the models looked like gay communists.  My first reaction was that while they might seem a bit French and gay, they were strikingly fascist – which doesn’t necessarily eliminate the first two.

Sure enough, a search of Google images with the terms “fascist berets” brought up a picture of the U.S. team. The beret, or caps similar to it have been around quite a long time, but appeared in military uniforms only in the 20th century, and has been particularly popular with paramilitaries and irregulars. 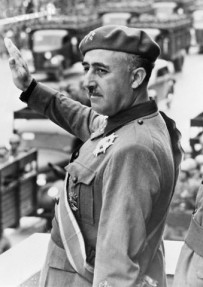 Franco. Fighters on both sides in the Spanish Civil
War favored berets.

Francisco Franco often sported one. I can remember World War Two Sergeant Rock comics where the maquisards fighting Nazis wore berets, but the Vichy Milice paramilitaries did too. And of course, the most iconic leftist of them all is pictured wearing a beret. 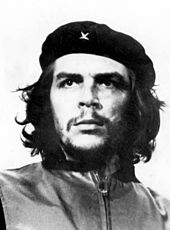 British fascists went bareheaded, but that’s not surprising: while they may have been fascists, they were Englishmen and not about to adopt dago headgear. 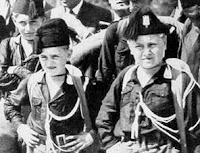 So what is it that makes the Lauren berets so fascist?  Take a look at the raised edge presented to the viewer, and then at these fascist youth in 1930s Italy.  It’s that rigid aspect that makes it militaristic.

I get the impression that the Lauren shop worked with the same images that Google threw up in response to my query.

Senate leader Harry Reid said that the uniforms should be thrown a pit and burned.  I don’t see it that way.  I think they represent Obama’s America quite well, and might even be the prototype for those of the national service corps the President has called for. George Bush, and pretty much any Republican will be called fascist, but the American left’s selective use of the term is a fair summary of their historical illiteracy. 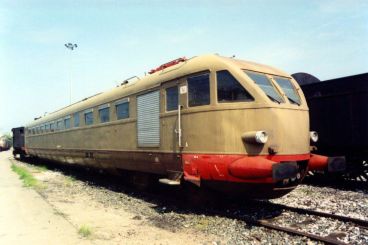 The burgeoning corporate state of the Obama years bears a good deal of resemblance in form and substance to other fascist regimes, albeit being a much lighter version so far. Mussolini may not really have made the trains run on time, but he was a big fan of the latest in fast electric rail, and today’s corporatists think that super trains are the latest thing.  The enormously costly high speed rail line from somewhere to nowhere  Gerry Brown intends building in California’s Central valley is the kind of monument to modernism that Il Duce and Albert Speer just loved. 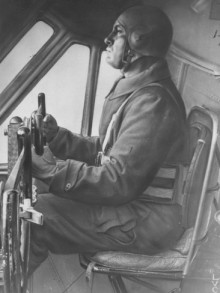 Mussolini also loved airplanes, and sent his air force to snuff out rebellious natives from above.  H.G. Wells , a fan of the Duce and the Fuehrer early on, wrote a book in which he correctly predicted the Second War, to be followed by a third and a final consolidation of power by aviators who control the human race from the skies.  As our skies are set to fill with drones, that doesn’t seem as farfetched after all.

Things do evolve:  European fascist movements were characterized by extreme nationalism and that includes the Soviet Union with “Socialism in One Country,” while the Obamist looks to trans-nationalism and diminished sovereignty.   This is not, however, the Trotskyite internationalism of brotherly solidarity, but the total control of Well’s aviators. 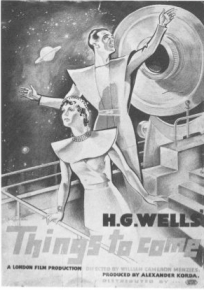 So, rather than discard the Olympic team’s uniforms, perhaps we should all get measured for one, as they might be de rigeur should Mr. Obama win another term, a future that will bear an 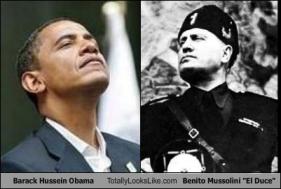 It’s not just the attitude, but the actions that make the resemblance.

uncomfortable resemblance to futures past.

Stuff I write About