I wouldn’t expect other than fatuous nonsense from this source.  What is disturbing is the many who agree with her.  So I put my two cents ( actually around 750 words in four sections due to 250 word limitation per post).

Here it is in its entirety:

I of course expected Ms Huffington to make no mention of Islam in her 9/11 piece, and after scrolling through the first six pages of comments I find it almost completely absent from the the  thoughts expressed.  One commenter viewing American foreign policy as a “root cause,” mentioned Iran in 1957.  I would be rather surprised  if Osama Bin Laden  had ever heard of Mussadegh, and if he had it would be ludicrous to assume this Sunni  Salafist would care about a Shia secularist from the left in Iran.  This is typical of  the logical gyrations in which some  people  engage so as to  exonerate Islam.

Whatever one thinks  of the “Wars to Help Muslims” (Beginning with the Gulf war, I have I opposed all five – count them – other than taking out the Taliban in Afghanistan, which was fumbled) and the growth of the National Security State, these developments have their origins in a total lack of understanding in the US of what Islam is, and how it affects statecraft in nations that profess it.

The absurd lengths to which people will go in order not to mention Islam stuns me at times.  Israel, or US foreign policy have nothing to do with the ongoing  murder, oppression and violence against Christians and other minorities in parts of Nigeria, India, Thailand, the Philippines, Indonesia, and Sri Lanka, in Egypt, Iran, Iraq, Pakistan, Bangladesh,  Sudan.  They have nothing to do with the internecine Muslim violence endemic in Iraq and Afghanistan,and the persecution, suppression and murder of Ahmadis in Indonesia.

One simply has to look at the rest of the world to see that there is no other belief system giving rise to such persistent and high levels of violence, not to mention appalling human development indices, outside the rich Gulf nations, and a general disregard for basic freedoms, most especially manifested  in low status for women, and in places, outright gender apartheid. Simple logic dictates that this is no coincidence.

On 9/11 we were attacked by Islam, a renascent Islam fueled by petro-dollars, another term  for our money. There have been other such  attacks throughout the history of Islam, starting from its base in the Arabian Peninsula,  sweeping hence to  rapid  dominance of the southern Mediterranean littoral and on into Western Europe

Tarik ibn Zayid, Arab conqueror of Spain. Artist's rendition, as no true portraits exist due to Islamic restrictions on depicting living being. He landed at Gibraltar, which is a corruption of Jebel Tarik, "Tarik's Mountain.". 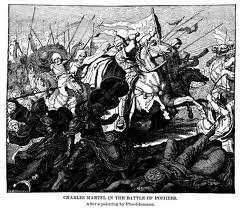 Charles Martel, King of the Franks, who decisively broke Muslim power in France, at the Battle of Tours, 732.

from Africa, and later from Turkey into Southeast Europe .  These waves were beaten back, but never has a country or region relinquished Islam voluntarily, or more accurately, has Islam peacefully relinquished territory.  The secular experiment of Ataturk in Turkey is at an an end, and Malaysia and Indonesia( where I live) may follow. We are, in a sense, experiencing the Third Jihad.  It will be the last. 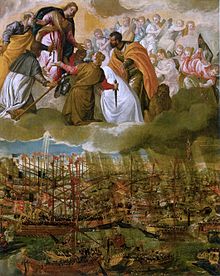 Despite continuing attempts, increasingly from lone actors, and of fairly amateurish nature, the US will most likely not see another 9/11 in my view.  This hardly means the danger is past.   We must prepare for an Islamic World from the Mediterranean to Southeast Asia that, while chaotic and disunited, will be unified in its hatred of us and our values.

On September 11, 1683 King Jan Sobieski III Of Poland joined battle with the Ottoman Turks to lift the Siege of Venna, begining the roll back of muslim power in Central and Southeastern Europe

One commenter here suggested withdrawing form the region( the Middle East and Afghanistan.  I would agree, and extend this withdrawal to ceasing any attempt to reach out to, understand, interface with, or influence developments in  the Islamic world.  Withdraw, but maintain our guard toward both external and internal threats. This would make as safer, and perhaps afford us the time and resources to heal  ourselves.

Finally, I exhort one and all: read the texts of Islam!  I sincerely doubt Messers Bush the elder and younger, Clinton or Obama ever have.

September 13: It is noteworthy that the anniversary of the two day battle outside Vienna in 1683,  in which the advance of Turkish Muslim power in Central Europe was stopped, is September 11/13.  Now we have no captains to fight the crescent, and Europe lies supine, while America slumbers.